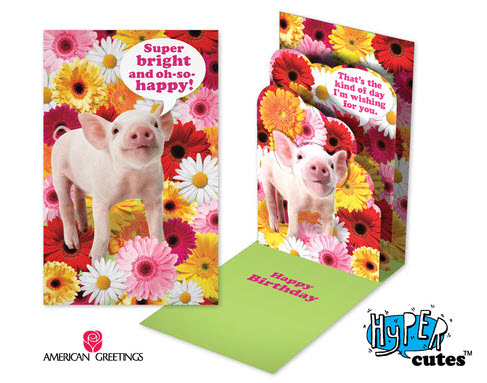 American Greetings has announced a new line of birthday cards called Hyper Cutes. Each card features a photo of an adorable animal that pops up and sings. The animal's mouth moves as they perform the songs. Some of the animals on the cards include piglets, puppies and polar bear cubs. Artwork on the cards includes daisies, gumdrops and ice cream.

Carol Miller, vice president of corporate innovation at American Greetings, says in the announcement, "Hyper Cutes cards really come to life in a way that will charm birthday boys and girls of all ages. The hilarious effect of the character's mouth moving in sync to the music is terrific entertainment, and the thoughtful sentiments are the perfect complement to these silly animal buddies."

We hope there will also be some kitten Hyper Cutes!