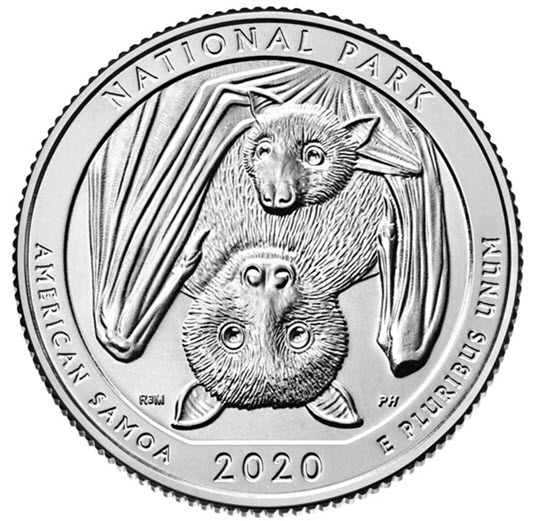 An upcoming quarter from the United States Mint features a fruit bat on the tails side. The quarter is part of the America's Beautiful National Parks Quarter program. This coin commemorates the National Park of American Samoa.

The quarter artwork features a Samoan fruit bat mother hanging in a tree with her pup. The U.S. Mint says, "The image evokes the remarkable care and energy that this species puts into their offspring. The design is intended to promote awareness to the species'’ threatened status due to habitat loss and commercial hunting."

The National Park of American Samoa is the only park in the United States that is home to the Samoan fruit bat. The park has an information page about the fruit bat on nps.gov. The interesting page says the species puts a great deal of energy and care into their young.

The fruit bat quarter was sculpted by Phebe Hemphill and designed by Richard Masters. The coin will be available starting February 3, 2020.