MarsCat is a Robotic Pet Cat from Elephant Robotics 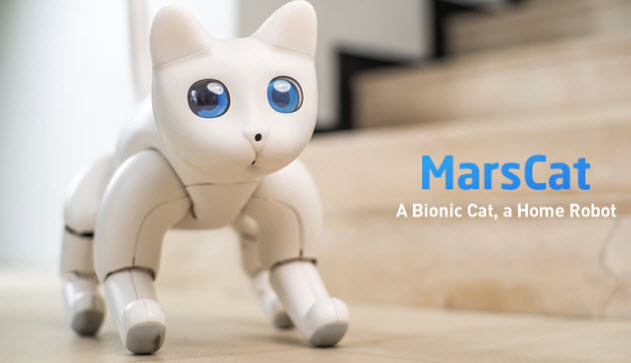 MarsCat is a new bionic pet cat from Elephant Robotics. The fully autonomous robot will appear at CES 2020. Elephant is currently running a Kickstarter campaign for the robot that has already exceeded its initial $20,000 goal.

MarsCat is designed to develop its personality the more it is played with. The robot was built with 16 servo motors. It walks, runs, sits, responds to commands and plays with toys. It makes meow noises and buries its litter.

Elephant Robotics says, "MarsCat is a good companion, it is fully responsive and interactive. It can play with you or your toys because it can feel, hear and see. Touch its head, chin or back to find out what it will react! It can also interact with objects or people nearby, even play with real cats."

Elephant says MarsCat owners will also be available to build their own applications with the MarsCat SDK. The protocol and library are open-source embedded in Raspberry PI. In addition to the servo motors, MarsCat also has touch scensors, camera, distance sensor, loudspeaker, voice mic and OLED eyes. It has a quad-core CPU with 16GB RAM. Accessories include changeable paws, cat teaser, cat ball and a toy fish.

The MarsCat is currently available for a $699 pledge through the Kickstarter campaign. The campaign page says the robot will have a $1299 MSRP when it is officially available.