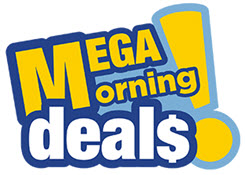 Mega Morning Deals is a deals show segment that airs on Fox & Friends, a morning show on Fox News. The show provides exclusive deals for viewers of Fox & Friends.

The deals are displayed during the show segment. Some of products are demonstrated if possible. For example, a recent segment featured a grill clinging robot and they had it running on the grill during the show.

Viewers are sent to the Fox & Friends website at foxandfriends.com for more information about the deals.

The segment airs about once a month on average. You can find the latest episodes here on Foxnews.com.

Find some of our hot deal picks on our Hot Deals page.