Over Half the World Owns a Smartphone 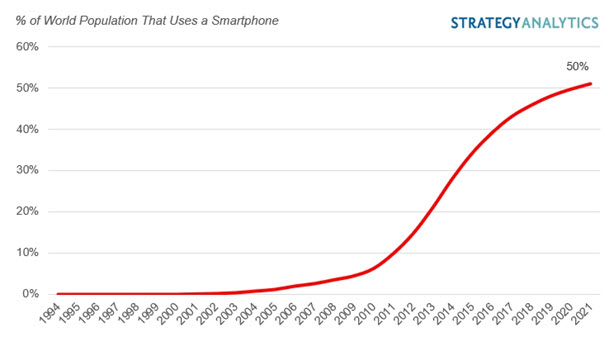 Over the half the world now owns a smartphone. A study from Strategy Analytics found that around 4 billion people use a smartphone today. Use of the technology has risen rapidly since it was introduced commercially in 1994.

Even poorer nations are seeing rapid rises in smartphone sales. Smartphones are a technology that has allowed people in some poorer countries to gain phone and Internet access even though landlines are not available.

Strategy Analytics says smartphone usage rose from 30,000 people in 1994 to 1 billion in 2012. As of last year there were 3.95 billion smartphone users. The number is likely even higher now given the slope of the chart.

Linda Sui, Senior Director at Strategy Analytics, says in a statement, "The world's first modern smartphone, IBM Simon, was launched commercially in the United States way back in 1994. This was followed by other famous models, such as the Nokia 9110 Communicator in 1998 and Ericsson R380 for Europe in 2000. Apple iPhone popularized the smartphone in 2007, while Google Android democratized the smartphone with an affordable software platform from 2008."

Neil Mawston, Executive Director at Strategy Analytics, says, "Half of humanity now owns a smartphone. The smartphone is the most successful computer of all time. Smartphones today are used by 4 billion people worldwide, from urban California to suburban China and rural Africa. Consumers and workers love the convenience, utility, and safety of having a connected computer in their pocket. Smartphones have become an essential daily tool. We predict 5 billion people will be using smartphones worldwide by 2030."

Data on NewZoo shows smartphone penetration by country. This video from Data Player shows how smartphone usage grew in top countries over the past three decades.