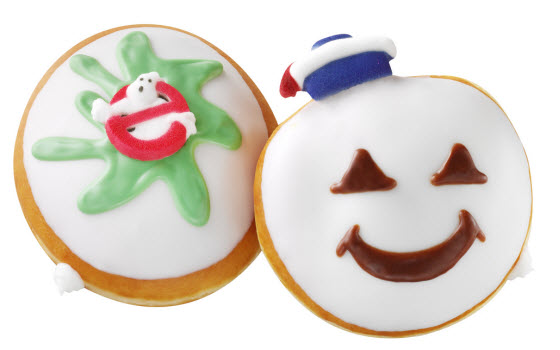 Krispy Kreme has launched two new Ghostbuster doughnuts. The donuts will be available from September 29th through October 31st.

The donuts include a Ghostbuster Doughnut, which has the Ghostbusters logo on it and green icing inspired by Slimer. The doughnut is filled with marshmallow Kreme. The Ghostbusters logo is made from sugar. The second doughnut is the face of the Stay Puft Marshmallow Man. It includes Stay Puft's cute little sailor hat, which is made from sugar. This doughnut is also cream filled. The Stay Puft doughnut is extra cute. Everyone remembers the giant Stay Puft Marshmallow Man stomping through New York City in the film after it was conjured by the god Gozer after Dan Aykroyd's character thought of it while trying to picture something harmless.

These new doughnuts are part of a collaboration between Krispy Kreme and Sony Pictures. They tie-in with the upcoming release of a 30th anniversary Ghosbusters Blu-ray. The film arrived in theaters 30 years ago in June 1984.

We would love to see a new Ghostbusters film. There have been rumors of a film with an all-girl Ghosbusters team. Bill Murray supports this idea and his casting ideas include Melissa McCarthy, Kristen Wiig, Linda Cardellini and Emma Stone. That would be a hilarious cast.