Deep Fried Twinkies to Arrive at Wal-Mart Stores in August 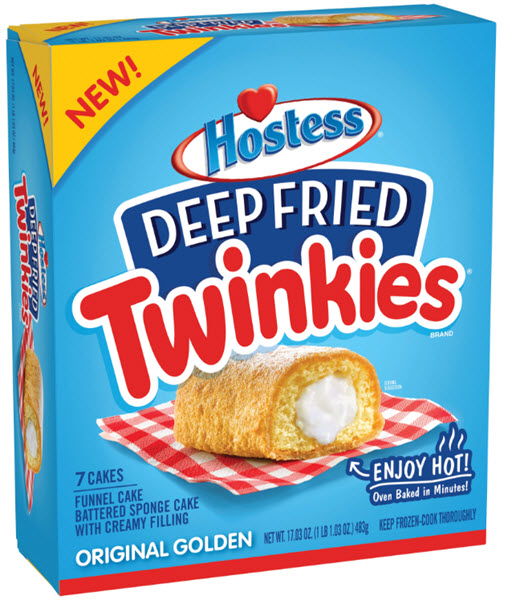 The only image of these fried Twinkies was shared in a a tweet by Associated Press national retail reporter Anne D'Innocenzio who broke the news. She wrote, "Deep fried Twinkies? Wal-Mart worked with Hostess to develop this decadent treat." She also says Wal-Mart has a one year exclusive on the snack item. In a response to another Twitter user she says Wal-Mart says the Twinkies will arrive in stores starting August 22nd.

Mental Floss reports that there will be two types of Deep Fried Twinkies: Deep Fried Chocolate and Deep Fried Classic Twinkies. The image shows the Hostess Deep Fries Twinkies packaging. Underneath the words "Enjoy Hot!" the packaging says you can bake them in the oven in minutes. They probably don't turn out very well if you microwave them.

Update 8-17-16: Hostess Deep Fried Twinkies have arrived in stores. They are found in the freezer aisle. They are available at Wal-Mart this summer and arrive at other grocery retailers later this year. They come in two flavors: Classic and Chocolate.