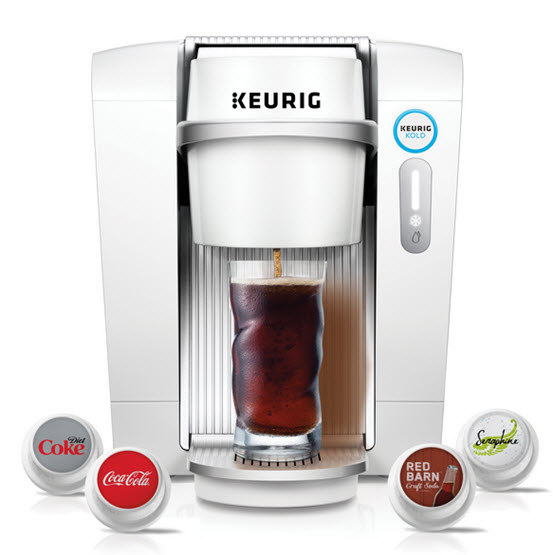 Keurig has announced a machine that makes cold beverages called the Keurig Kold. Keurig says the machine uses a thermal transfer system to rapidly cool beverages. The machine can also make carbonated beverages without the need for a CO2 canister using something it calls Karbonator beads.

Keurig is targeting the soda pop drinking crowd with the device. Consumers will be able to make beverages like a Coca-Cola or Dr. Pepper using pods in a similar way to how you use a pod to make a hot coffee in the Keurig. The device chills beverages to around 39 degrees in about 90 seconds. The Kold device can also make seltzers, sports hydration drinks, flavored waters, soda fountain beverages and iced tea.

Some of the brands Keurig has partnered with for the Kold device include Coca-Cola, Dr. Peeper, Canada Dry, Seraphine, Flyte, Waterful, Red Barn, Flynn's Soda Shop and Tierney.

A story in Wired makes the argument that the Kold machine may not be as much of a time-saver as the original Keurig. It isn't very hard to open up a can of Coke but using a coffee pod to make a single cup of coffee does save time. However, the Kold device may be more attractive to people who love chilled beverages, such as iced lemonade and iced tea. These consumers may not be interested in soda pop but still want the device. Keurig also says cocktail mixers are coming which could make the machine popular at parties. The device could also be popular with people who closely watch their calorie and sugar intake.

The Keurig Kold is priced much higher than the Keurig at $369.99. It is currently available for pre-order only on Keurig.com. It takes 4 to 6 weeks to ship. Keurig says Kold will arrive at retailers online and in several cities starting next month.