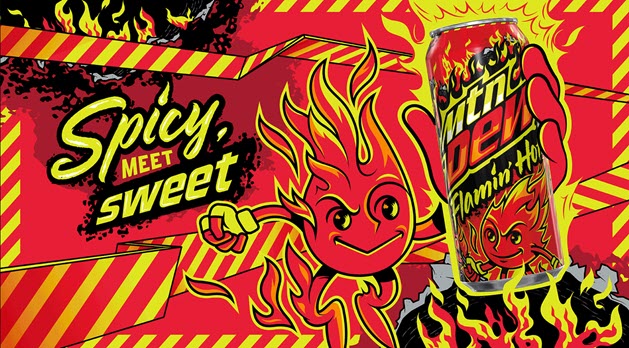 PepsiCo has a new Mountain Dew flavor called Mtn Dew Flamin' Hot that has both sweet and spicy flavors. A little fire mascot was created to go along with the new beverage.

The beverage was also named the official drink of Hell earlier this year. Hell is the name of an actual town in Michigan. The town apparently cut a smart deal to cash in on its unusual name.

DJ Pauly D traveled to Hell, Michigan for the promotion. He says, "When MTN DEW asked me to go to Hell, I thought they were messing with me. But then I realized they wanted my help to make Hell even hotter with my fire beats. There is no one better to bring the heat. Yeaaahhh buddy!"

The beverage arrived in stores earlier this year. Some of the early reviews are not great.

The reviewer at AZ Central thought there wasn't much spicy flavor while the MassLive reviewer thought it had a cayenne pepper flavor.

The Endorsement and Shut Up Camilla discuss the beverage in this video.