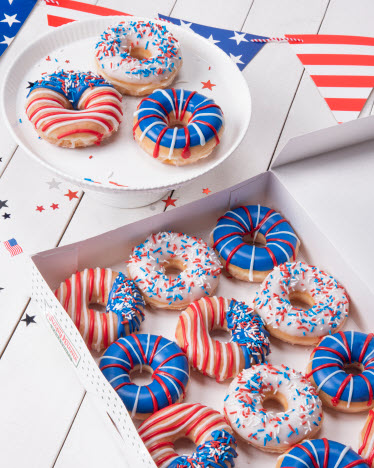 Krispy Kreme Doughnuts has announced the launch of its Freedom Ring doughnuts for the Fourth of July. The doughnuts are decorated with red, white and blue icing. They are topped with patriotic sprinkles to resemble the flag.

Krispy Kreme says in the announcement, "Less time cooking = more time with your family pretending you know what 'o'er the ramparts' means."

There are three types of patriotic doughnuts for 2019:

The Freedom Ring doughnuts will be available at participating U.S. and Canadian locations for a limited time according to the Krispy Kreme website. The doughnut company also says, "Win #The4th with our Patriotic Doughnuts in select US shops."