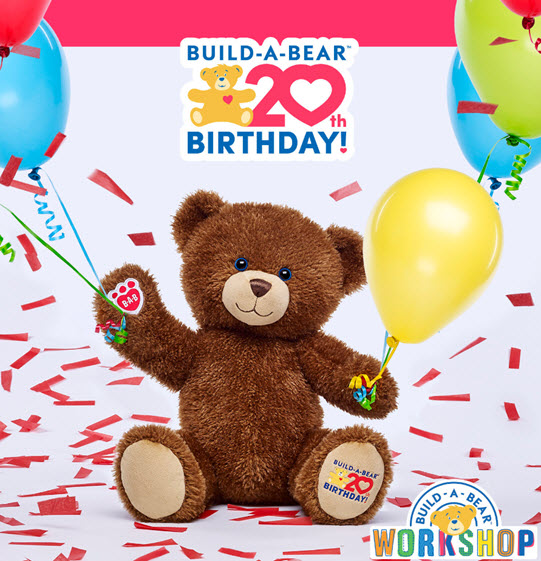 Build-A-Bear is celebrating its 20 year anniversary this year. They have launched a new bear for the anniversary. It is called the 20th Birthday Celebration Bear. Build-A-Bear will also host parties on the 20th of each month this year.

Sharon Price John, president and chief executive officer, Build-A-Bear Workshop, says in a statement, "Since 1997, more than 150 million furry friends and countless memories have been made at Build-A-Bear Workshop. We are incredibly grateful to those who have shared cherished memories, meaningful moments and furry friend hugs with us over the last 20 years. Many of our Guests, who discovered Build-A-Bear Workshop as kids and teens, are now bringing their own children to our stores to experience the joy of making a new furry friend. Today, we invite Guests of all ages to join us in making our 20th year the best one yet and to help us continue to 'add a little more heart to life' for years to come."

The 20th Birthday Celebration Bear is a 16-inch brown bear with blue eyes. It has a 20th birthday logo on its paw pad. The bear has has posable arms and legs. It retails for $25.50.