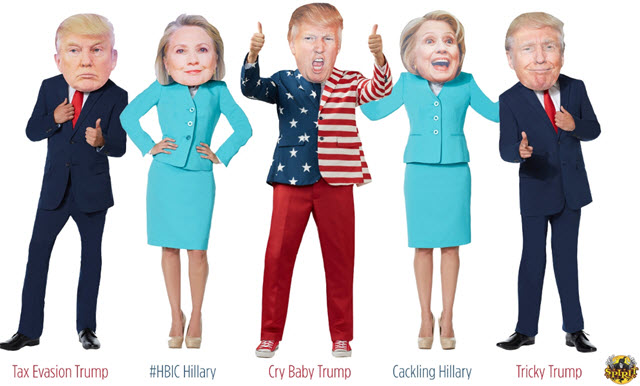 There is one poll out there that Donald Trump is currently winning. With the election just a couple weeks away Trump is ahead in the Halloween mask poll. Spirit Halloween says Trump masks are outselling Hillary Clinton masks 55% to 45%.

Spirit Halloween says its Spirit Index of candidate mask sales has accurately predicted the outcome of every presidential election since 1996. Spirit offers a variety of candidate masks this year including Cackling Clinton, Cry Baby Trump and Tax Evasion Trump.

Steven Silverstein, President and CEO of Spirit Halloween, says in a statement, "With such a historic and eventful year in politics, we are eager to track the progress of our candidate mask sales as a fun comparison to more traditional polls. Spirit Halloween's Presidential Mask Index is an exciting and spirited way to bring together two American traditions -Halloween and Democracy."

Spirit Halloween teamed up with Harris Poll to survey consumers about why they would dress up as either candidate this Halloween. A finding that may not be great for Trump was that 39% chose Donald Trump because they wanted to be funny while 31% chose Hillary Clinton because they like her. Also, 32% of Americans choosing to dress up as Donald Trump said they would do so in order to mock him while just 16% of those choosing to dress as Hillary Clinton for Halloween said they were doing it to mock her. It won't be long before we know whether or not the Spirit Index will be correct again in 2016.