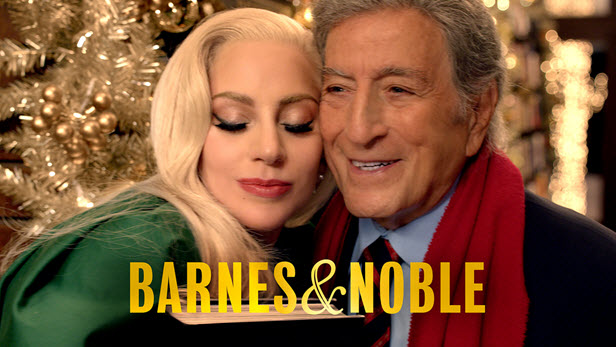 Lady Gaga and Tony Bennett star in a cute holiday ad for Barnes & Noble. They sing "Baby It's Cold Outside" while browsing for books inside a Barnes & Noble store. The ad campaign was products by Roberts + Langer DDB.

Barnes & Noble Chairman Leonard Riggio came up with the campaign slogan "You Never Know Who You'll Meet at Barnes & Noble" and selected the artists for the campaign. Gaga and Bennett won a Grammy Award for their collaborative album, Cheek to Cheek.

The commercial begins with Lady Gaga entering a warm Barnes & Noble store on a cold snowy night. She looks fabulous in a green jacket over a black dress with green heels. She starts singing as she browses the selection of books. Soon she is joined by a male voice from another book aisle. She turns the corner to see that it is her good friend Tony Bennett.

Bennett is holding the book Isabella Blow by Martina Rink, which he was likely about to purchase for Lady Gaga as a gift. The adorable commercial was directed by Swedish director Jonas Akerlund.

The ad was previously on YouTube. It can still be viewed on iSpot.tv.