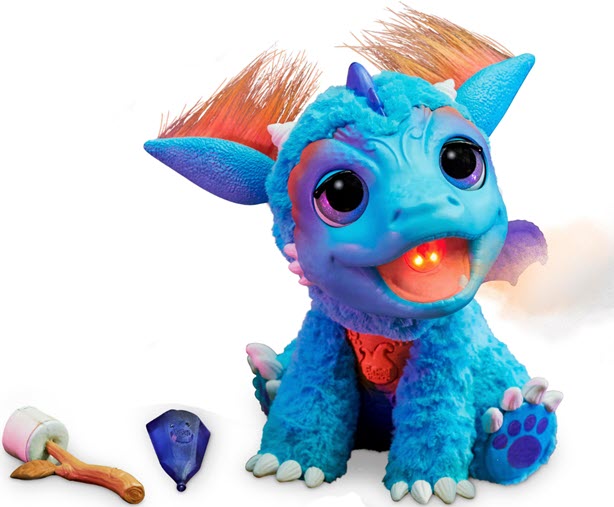 Hasbro introduced a new animated plush toy at the 2016 Toy Fair. The new toy is Torch My Blazing Dragon. The dragon joins other FurReal toys already in stores that include a unicorn, dogs, baby panda, show pony, penguin, fox, bunny and many other animals.

The little dragon is light blue and purple colors. He makes adorable baby dragon-like noises. He also makes eating noises and burbs. The dragon has a cool flame mist effect. When a marshmallow is placed in front of its mouth Torch will roast the marshmallow with his flame. The dragon also has moving eyes and ears.

Torch has sensors in his nose and stomach. He has over fifty sound and motion combinations. His front arms can be moved to different positions. Here is a video of the cute little dragon breathing fire and helping roast a marshmallow at the 2016 Toy Fair:

Pricing information and a release date for Torch have not yet been announced. It is most likely to arrive in stores this fall.