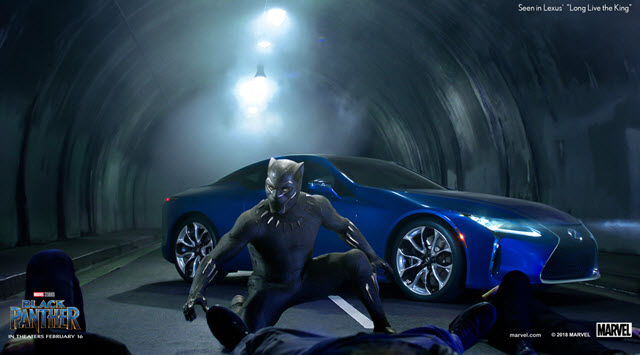 The Black Panther stars in a new Lexus Super Bowl ad called "Long Live the King." The commercial features the 2018 Lexus LS 500 F Sport. It stars Chadwick Boseman as T'Challa. The Black Panther is trying to recover stolen vibranium in the ad.

Mindy Hamilton, Marvel’s senior vice president of global partnerships and marketing, says in a statement, "With a character as important as Black Panther and a brand as iconic as Lexus, we knew that we had to rise to the occasion by creating something unforgettable. It’s a climactic moment for all of us as we come together to celebrate this wonderful collaboration and enjoy the big game."

The song "Legend Has It" by Run the Jewels, plays in the ad. The song is also used in the movie trailer. The ad was shot using only original costumes and gear from the film. Take a look:

You can watch the ad on Hollywood Reporter.