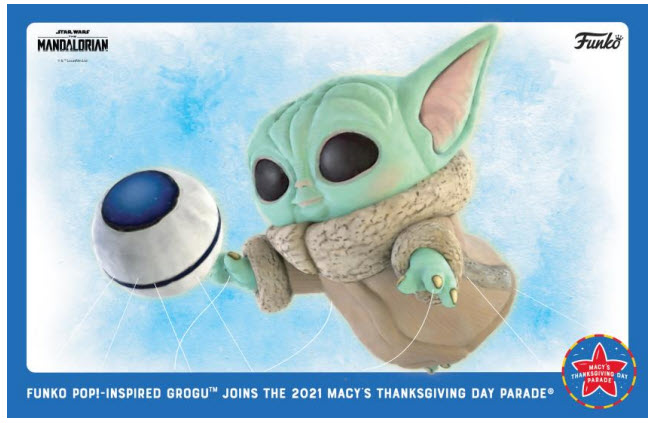 Grogu will be one of the balloons flying in the 2021 Macy's Thanksgiving Day Parade this year. Funko, Macy's and Lucasfilm have collaborated on the Funko Pop! inspired balloon. Grogu stars the popular Star Wars The Mandalorian series that airs on Disney+.

The Grogu-inspired balloon will measure 41-feet high, 29-feet long and 37-feet wide. It will fly down the streets of Manhattan during the parade on Thanksgiving Day. Grogu will be flying with his favorite little toy.

Will Coss, Executive Producer, Macy’s Thanksgiving Day Parade, says in the announcement, "The giant balloons in the Macy's Thanksgiving Day Parade have always reflected the very best of pop culture and there is no better example of that than Grogu who has become an instant global sensation. We are thrilled to collaborate with Funko and Lucasfilm on this Funko Pop! version of the beloved character that is sure to delight legions of Star Wars galaxy fans."

Funko is also launching a line of new Star Wars products in collaboration with Lucasfilm. These will include bobbleheads, keychains and apparel. A look at some of the upcoming Grogu balloon merchandise can be found on starwars.com.